The Story of Anubis

You may have seen Anubis
in your sixth grade social studies textbook
in the chapter on “Ancient Egypt”
or in a display case at the natural history museum
by the mummies and other artifacts.
He had a man’s body
(pretty ripped in modern depictions)
and a black jackal’s head.
Pointed ears, standing alert.
If you died in ancient Egypt,
he made sure your embalming didn’t go sideways.
Because no one wants that.
Then he would lead you into the Afterworld,
protecting you from crazy demons that
probably had a baboon’s body and an ibis’s legs
and a human’s head and jaguar teeth…you get the idea.
He would weigh your heart against Ma’at, or truth
and determine the fate of your soul.
If you were an asshole, Ammut would devour you
with his sharp crocodile teeth.
If you were a good person, you went on
into your awesome afterlife,
and Anubis made sure you got there in one piece.
So as you can see, Anubis was, for many, many years
a very busy, hardworking guy.
Thousands of years passed,
and humans no longer believed in Anubis
or the other fantastic man-woman-beast deities,
and they no longer passed into the Afterworld
with Anubis at their side.
God could see that Anubis was bored,
being mentioned now only during history classes
or museum tours.
“You’ve been a faithful servant for so long,”
God said to Anubis.
“Is there anything you’d like to do before you retire?”
Anubis thought long and hard for a few moments
until the silence was almost uncomfortable.
Then he said,
“I would like to live a mortal life.”
God replied, “Are you sure about that?
Mortals’ lives are short and often painful.”
“I would like to give it a shot,” Anubis said.
“Just for a little while.  To understand
why some people were so upset about leaving their world.”

Because Anubis was good
and only understood goodness,
God made Anubis a dog.
He gave Anubis to a human family,
who loved him as they would a child,
especially The Lady.
The Lady took Anubis on walks and car rides,
gave him treats and countless kisses on the top of his head.
The Man was better at giving ear scritches,
but the Lady sang him songs
and gave him about fifteen silly nicknames.
He protected her every day
from squirrels and schnauzers and pizza delivery men.
He lay at her feet in the bed,
vigilant for those old monsters from the Afterworld,
willing to give his life for her if he had to.
But it never came to that.
Anubis knew the joy of running at full speed,
which he could do almost better than any other dog.
He loved chasing tennis balls
and ripping the squeakers out of his stuffed toys.
He barked and lunged at other dogs in the neighborhood
and chased away huge flocks of geese
and sometimes knocked The Lady over in his exuberance.
She said, “Goddamnit, Anubis!” but was quick to forgive.

And years went by,
and Anubis grew old, for a dog.
His body didn’t work as well as it used to,
and he knew The Lady and The Man worried.
The Lady sought cures scientific and holistic,
gave him supplements and special food,
but he started limping,
and then he stopped eating.
It hadn’t been nearly enough time.
The Lady would have gladly shaved off
a few years of the end of her life
to give Anubis more time.
I mean, who wants to be like 87 years old, anyway?
But in the end, it never came to that.
There wasn’t a choice.
The Lady and the Man said goodbye,
tears falling from their eyes onto Anubis’ fur.
And they told him over and over again
what a good boy he was
and how they’d love him until the end of time.
And they stayed at his side, petting him,
until he breathed his last.
But don’t worry,
he didn’t really die.
None of us really do, and besides,
he was an immortal minor deity
from ancient Egypt.
So Anubis crossed over into the Afterworld,
where God was waiting.
“So, what did you think?” God asked.
“It was beautiful,” Anubis said.
“But far too short.”
“I know,” God replied.  “But you’ll see
them again before too long.”

Years and years and years went by,
and the Lady (who had done lots of awesome things
and loved many wonderful people and dogs)
had grown old, for a person.
Her body didn’t work as well as it used to,
and she had stopped eating.
Even then, it hadn’t been enough time.
With her loved ones at her side,
she was breathing her last
but suddenly gasped with joy.
Her old and dearest friend, Anubis,
who was given one last job,
had returned to guide her home. 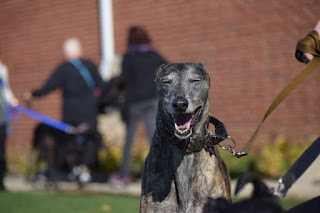